Menu
Browse: Home » Products » What Will The World Be Like? 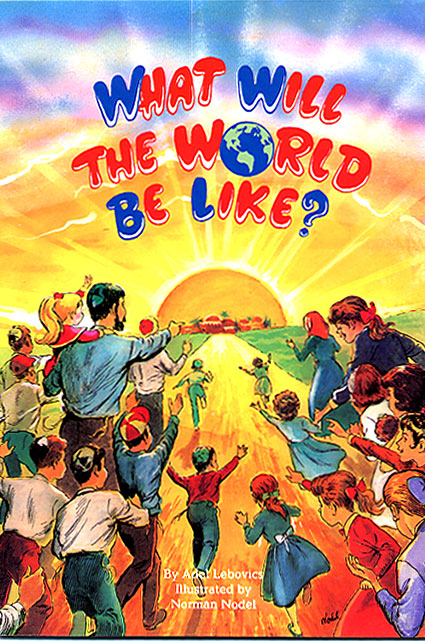 What Will the World Be Like? Did you ever wonder what the future holds in store? Most people have, including young children who ask their parents probing questions. Jewish tradition has much to say about the era of Moshiach, and now a beautifully illustrated picture book provides these important answers for the very young. One Night after supper before she went to bed, Sarah looked uo at her father, and this is what she said, “What will the world be like?’ A topic that intrigues children and adults alike, this book provides an exciting glimpse into the future!

Jewish children lost a dear friend on February 25, 2000, with the demise of Norman (Nochem Yeshaya) Nodel, noted artist and illustrator of children’s books and magazines. The son of an Orthodox Rabbi, Mr. Nodel began his illustrious career as a field artist in the army, drawing military maps during World War II. Serving with the United States forces in Europe, he won medals for his courage, and helped in the liberation of Europe from German fascism. After the war, he pursued a successful career as an artist in a variety of styles, notably illustrating the famous Classics Illustrated series in the ’50s, and working on a number of projects for large publishing companies. During the last twelve years of his life, Mr. Nodel devoted a major amount of his time and energy to illustrating books and magazines specifically for Jewish children, which gave him great pleasure and satisfaction. Mr. Nodel began working in the Jewish market in 1988, when he started illustrating for Tzivos Hashem and The Moshiach Times. After completing the popular “Labels for Laibel” for Hachai Publishing, Norman’s talent was quickly recognized and in great demand by almost every major Judaica publisher: His talent literally “cornered the market,” to the extent that there can hardly be an affiliated Jewish child today who is not familiar with his work. One might well say that Mr. Nodel raised and educated in his own way, a whole generation of Jewish children, with his work appearing virtually all over the world, in America, Europe, Israel, Russia, Australia, and South America. He was a truly special person, whose gentle wit and elegant charm are reflected in the graceful strokes of his drawings. In all his work, one sees the same qualities of modesty, pride in being Jewish, and warmth and affection for others, together with a unique elegance of style, integrity, and even a nobility of character. He was a living example of derech eretz and respect for others. He treated everyone who came to him as if they were the only one he worked for, and as a result, everyone felt that he belonged solely to them. He loved to joke around, and always liked to have the last pun. And his gentle wit showed in his artwork too, such as in the “What’s wrong with this?” picture, that shows a goat eating a succa, and a fish taking a casual stroll with an upside down cane. Mr. Nodel worked to the last day of his life, and despite crippling arthritis, he never complained, but rather always put himself out to meet deadlines for all those who counted on him. “I’ve never let you down,” he would say to clients who were worried about a deadline. And he never did. He will be sorely missed by family, friends, and scores of clients who all became his friends, and Jewish children everywhere.