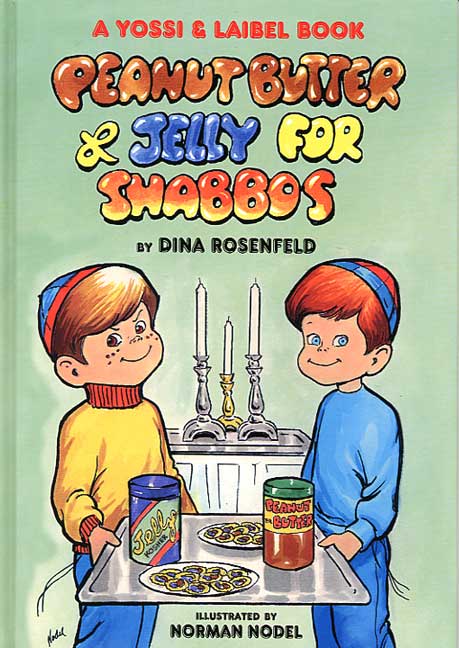 One Friday afternoon, Yossi and Laibel are confronted with a seemingly impossible task. With the right attitude and a little ingenuity, the two brothers find out that they can try hard and succeed. Lively illustrations and bouncy rhymes make this book a joy to look at and fun to read!

Peanut Butter and Jelly for Shabbos is the third in the series of  Yossi and Laibel books. dealing with two brothers  always being  “tested”  to  do the proper thing.   The first book has a sharing theme  sharing is something all people must do.  The second book has a helping  theme helping no matter what and no matter who. Peanut Butter and Jelly for Shabbos has theme of acceptance – of a special needs child with the refrain  it’s what you’re like inside that makes you a friend.

Through rhyme and action-filled pictures,  Yossi and Laibel are challenged to meet , real life situations. Their character is developed through their  conflicts and, compromises. The problem arises when the boy”s mother, coming home with the new baby, gets caught in a snow storm.  As it get later and later the boys decide that even though they have never made a Shabbos meal in their lives they can’t let that stop them-we’ll only succeed if we’re willing to try.

There are restrictions on the boys – no using sharp knives and no turning on the stove.  Grandfather is there, but they don’t want to disturb his learning.  Two little boys, left to their own devices, following rules find the true essence of  Shabbos.  Their creative  culminary  substitutions will delight the reader.

When you recall the foods of  Shabbos you might remember the smell of freshly baked challah-but two bagels is all they had; you might remember the taste of the gefilte fish-but tuna was the substitute.  Thinking of the main course we can envision meats and kugels-but all they could do was spread peanut and jelly on crackers. They transformed  the everyday mundane foods to one fit for the Shabbos queen.

To go Beyond the Book with Peanut Butter and Jelly for Shabbos we can discuss the obvious lesson.-that challenges in life are to be met not by thinking but by action.  To think of Yossi and Laibel as friends to emulate ,will only benefit a child’s character development  and confidence. There is a second message maybe a little more subtle — The children feel an obligation to the family to have a Shabbos meal ready and to do it by obeying the rules set for them.  Nothing sharp and nothing hot are allowed.  Their behavior demonstrates in a very concrete way,that rules are to be respected at all times ,even when no one is looking.

We can use this book to discuss trust in the child’s behavior and recognition of the selflessness in wanting to “pick up the slack” when it looked like no one else could do it.  And when Bubby came with her traditional foods-the table included the Yossi and Laibel’s contribution to the  meal. The illustration of that banquet style table with the children’s food along side the traditional ones  will bring joy and delight to any child’s eyes.

To Go Beyond The Book with Peanut Butter and Jelly brings us to the real essence of Shabbos-it is not the 25 salads we serve ,or the best cut of rib roast or even the dessert worthy of Martha Stewart-it is about a family being together.  Parents having  pride that their children were so obedient  responsible and thoughtful and children feeling gratitude that their parents respected their efforts.

It is that regard for each member of the family-from grandparents to the newborn that the model for a lifetime of selflessness is based.

Rebbetzin Yungreis spoke of her experience of hunger during the war and how each Friday night her father would pick up a crumbs of bread and pretend that each one represented soup or fish or kugel or fresh challah.  She said it was that visualization that kept their hope that there would be a future.