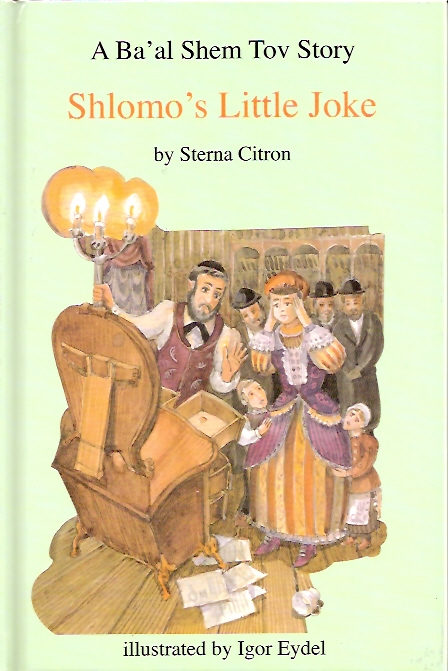 Shlomo’s friend Meir has left a pile of money in a drawer where anyone can just take it! Shlomo is very upset. He wants to teach Meir a lesson. The little joke starts to turn sour. But then Shlomo meets the Ba’al Shem Tov who helps him out of his trouble.

Sterna Citron, who grew up hearing Chassidic stories such as Shlomo’s Little Joke from her illustrious father Rabbi Eli Chaim Carlebach a”h, now lives in Los Angeles, California, where she publishes an international magazine for Jewish teenage girls called Shoshanim. She is the author of Why the Ba’al Shem Tov Laughed; 52 Stories About our Great Chassidic Rabbis as well as of three Kerem Books for children called Hirsh’s Secret, Zushe’s Find, and The Shepherd Boy Who Loved G-d. This book is her fourth picture book in the Kerem series.

Illustrating from the time he was 15, Igor Eydel studied privately under Nahum Ostashinsky in Kiev (Ukraine) and later attended the Art Institutes of Kiev and of St. Petersburg (Russia). In 1992 Mr. Eydel immigrated to the United States where he created stained glass windows for two Los Angeles synagogues and designed the bimah, aaron kodesh, and mechitzah for a third. His illustrations for the Kerem Children’s books were inspired by the text of the stories as well as by Marc Chagall’s illustrative techniques.