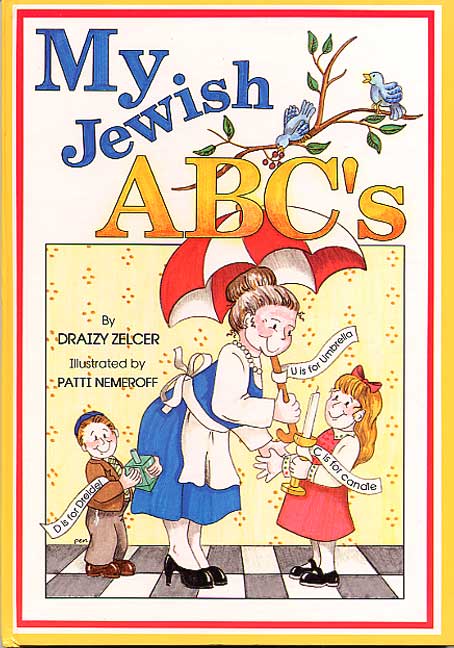 My Jewish ABC’s is a new way to introduce the English alphabet to your child…using objects that are an important part of a Jewish child’s world.

In this charming and original picture book, each letter of the ABC’s is paired with a familiar Jewish object or concept to make learning fun.

A is for Afikomen that Ari can hide.

D is for Dreidel that Dina did spin.

G is for Gragger the greatest of toys.

The delightful rhyming verse is printed in large clear type – just perfect for beginning readers.  Bright detailed illustrations will make this book a favorite of pre-schoolers and toddlers as well.

·An alphabet review chart at the end of the book.

What a great way to teach the alphabet and the ABC’s of Judaism!

My Jewish days of the Week

Draizy Zelcer is a reading specialist.  This is her first book published by Hachai.  She lives in Brooklyn, New York with her family.

Patti Nemeroff is a graphic designer who lives and works in Bath, Ohio. She has worked in the graphic design field for 25 years, serving a long list of clients. Patti collects animation cells, and her love of cartoons perked her interest in children’s book illustration. She worked illustrating workbooks and other school materials for seven years. She has a special interest in projects involving developmentally handicapped children. My Shabbos 123’s is her second book for Hachai Publishing. The first being the very popular My Jewish ABC. Patti is married to an Industrial-Organizational Psychologist and has two daughters.

“…This book is not just instructive in the English alphabet, it teaches …the ABC’s of Judaism as well.”  The Jewish Community News

“…a fun book of learning and teaching and being Jewish.” Algemeiner Journal