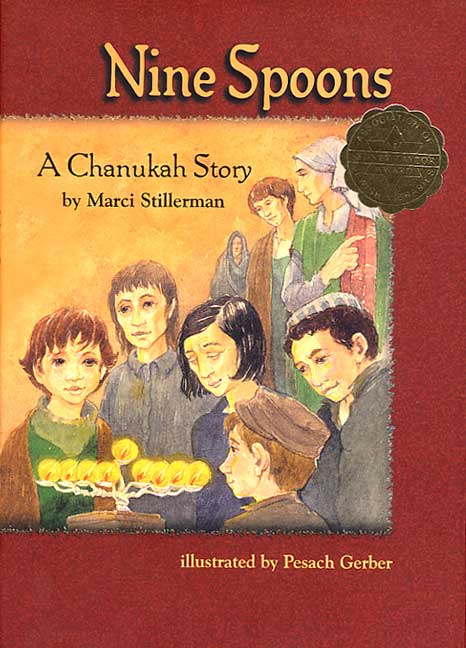 As her grandchildren gather around Oma at the family Chanukah party, she tells them a familiar and beloved story.  Years ago, when she was a young woman in a Nazi concentration camp, her bunkmate declared she would create a menorah for the children in the barracks if only she had nine spoons.

In the camps, spoons were rare, valuable utensils, but the interned women began making sacrifices and taking risks to collect them.

How these brave prisoners obtain each spoon is also a story of their work life, camp conditions and their devotion to mitzvah observance in the face of darkness and despair.

As Oma recounts her experiences, her grandchildren join in with the parts they know, promising always to remember.

Based on true events, Nine Spoons is more than a Chanukah story. It can be cherished throughout the year for its sensitive portrayal of mesiras nefesh, self-sacrifice for the performance of a mitzvah, which is a timeless quality of the Jewish people.

Marci Stillerman was born in Chicago just as Hitler began to cast his dark shadow. Eventually, nearly every member of the families of both her parents perished in the Holocaust. After acquiring a BA in English and American literature and a MA in Journalism, Marci spent the following years raising a family. Recently she has achieved great success with her writing. Her work has appeared in Highlights, Cricket, Shofar and other children’s publications. In 1992, she won the Educational Press Assn. of America Distinguished Achievement Award for Excellence in Educational Journalism. Nine Spoons is her first book for children. The author lives in California with her husband.

Perren (Pesach) Gerber attended the Chicago Academy of Fine Arts after high school and the School of Visual Arts in New York City after his time in the Service. He has worked as an engineer, draftsman, cartoonist, illustrator, exhibit/display designer and manufacturer, commercial sculptor and collectible designer- artist.

To illustrate Nine Spoons, the artist envisioned the lights as faith burning through the darkness of time.

Mr. Gerber has a son living in Boulder, Colorado, a daughter living in Chicago, and a stepdaughter in Austin, Texas. The artist lived in Grayson, Georgia.

“(A) moving story…even young children will gain an understanding of the deprivations faced by the inmates.”  School Library Journal.

“Told with eloquence and subtlety. . . and illustrated with such care and     love that young children will not be frightened. . .”

“A beautiful story with literary quality and graceful illustration.”

Marcia Posner, Librarian of the Holocaust Memorial and Educational Center of Nassau County.

“The respectful and dramatic narrative conveys the bonds of faith and community.”  The Horn Book Magazine.