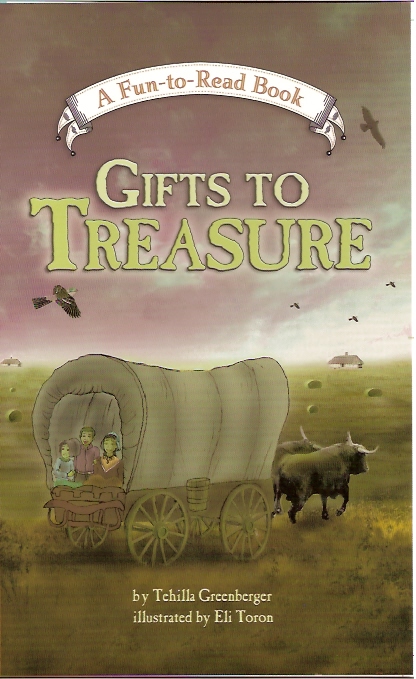 While most Eastern European Jews fled the pogroms of Russia and settled in large cities, some brave souls did try to take advantage of The Homestead Act and helped settle the American midwest.

Gifts to Treasure is the tale of the Rabinovich children who join their Papa in America after four long years apart.

Twelve-year-old Raizel, eleven-year-old Moshele, and curious nine-year-old Chaya have never been anywhere but the crowded Russian shtetl.  How strange it is for them to see so much open space on the flat North Dakota prairie!  How odd it is to live in a soddie, a home built out of the hard dry bricks of earth cut from the earth!

Each child has brought a gift from their grandparents back in Europe… a gift to remind them that living as a Jew is the most precious treasure no matter where they are.  Only Chaya has trouble figuring out what her gift is supposed to be… or how it could possibly help her face her future as an American pioneer.  Will she ever solve the mystery of Bubby’s unusual gift?

Parents and teachers of new independent readers want short chapter books to fuel their child’s hunger for great reading material.  Gifts to Treasure is geared to children ages 10 + who still need large, clear letters and an occasional illustration as they try out their skills.

Most importantly, Gifts to Treasure is packed with Jewish historical content and detail about the American immigrant experience in the late 19th century to make a child’s reading experience truly worthwhile.