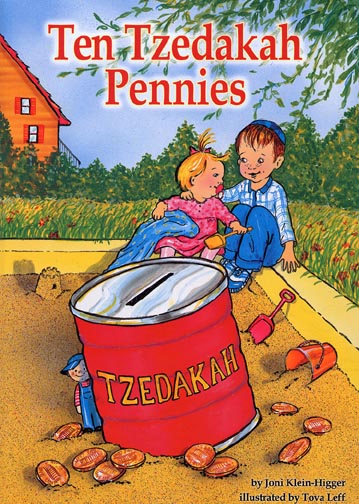 View Gallery
By Joni Klein-Higger In - All Title and Ages 2-5 Tagged In Tova Leff.

Tzedakah, charity, is one of the cornerstones of Jewish practice… and that’s why it’s never too early to instill this important mitzvah in our children.

Ten Tzedakah Pennies is a story that will appeal to the very youngest toddlers.  It begins with a little boy who has ten pennies and a large tzedakah box.  Throughout his busy day, he gives each of his beloved family members a turn to give tzedakah, leaving one penny less than before.

Ten tzedakah pennies all in a line,

Along came my father, and now there are nine.

Every time we meet each new family member, the reader will see a row of pennies on the page corresponding to the number the little boy has left.  As each penny is given to tzedakah, it is subtracted from the row.  Children and parents will enjoy counting together as the story progresses.

Who will get to put the very last penny in the box?  The suspense continues to the very last colorful page of this sweet rhyming book.

Check out Joni Klein-Higger’s Animoto video on her book:

Joni Klein-Higger grew up in Valley Stream, New York, and has been a songwriter for over twenty-five years. After the birth of her first child in 1991, she began creating a variety of children’s songs and musical plays, currently being performed by religious, public, and private schools throughout the United States.